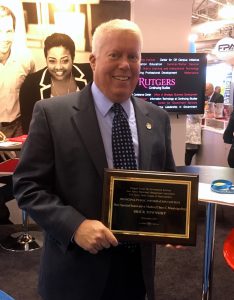 “We have worked hard to create an open and transparent town hall. Using Facebook Live to hear directly from residents and engage them in a dialogue about Brick is a continuation of those efforts,” said Mayor Ducey. “It is an honor to be recognized for our efforts to keep the citizens informed and engaged.”

Brick Township’s award was for Class C Municipalities, which for the purpose of the contest are the 130 municipalities with more than 20,000 residents.

Facebook Live is a free live-streaming service offered by Facebook. It allows users to live-stream content. Mayor Ducey began using Facebook Live in December 2016 and since then has hosted 20 sessions. During each session, Mayor Ducey answers questions submitted during the broadcast by viewers.

“I would like to thank all the residents who watch the Facebook Live and ask questions. These sessions don’t work without you,” said Mayor Ducey.

Each session is archived and available for viewing on-demand. The videos of the sessions have been viewed over 59,000 times cumulatively.

This is the third time in four years that Brick Township has been named an award recipient in the contest. In 2014, the Township won the Best Special/Innovative Award for Talking Brick with Mayor Ducey and in 2016 the Township was awarded Best Web/Social Media.

The next Facebook Live with Mayor Ducey session will take place on Tuesday, November 21 at 11am. You do not have to be a Facebook user to watch however, if you would like to ask a question, you do have to be a registered Facebook user. Visit Brick Township’s Facebook page at www.facebook.com/BrickTwpNJGovernment to learn more or to view past sessions.