Mayor John G. Ducey is proud to announce the promotion of Brick Township Lieutenant David Forrester to the rank of Captain, Sergeant Henry Drew to the rank of Lieutenant and Patrolman Austin Kenny to the rank of Sergeant. Mayor Ducey administered the oath of their ranks at the December 5 Council meeting.

“These three men are all exceptional law enforcement officers. These promotions are well-deserved and I am confident that they will each continue to succeed in their new roles,” said Mayor Ducey. “It was an honor to be able to promote them and I wish Captain Forrester, Lieutenant Drew and Sergeant Kenny continued success.” 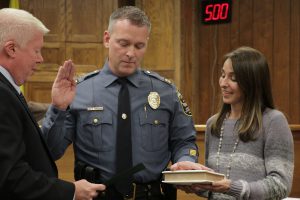 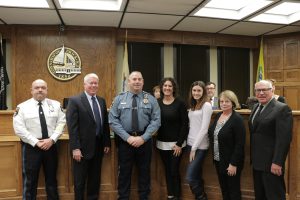 Lieutenant Henry Drew has been a member of the BTPD since January 1995. He is a 1989 graduate of Brick Memorial High School and a 1993 graduate of Kean College. Lt. Drew began his career in the Operations Division. He served on the Ocean County Narcotics Strike Force from 2004 – 2006 and was in the BTPD Drug Enforcement Unit. He was promoted to the rank of Sergeant in October 2007. He has served in the Community Policing and Investigations Divisions. 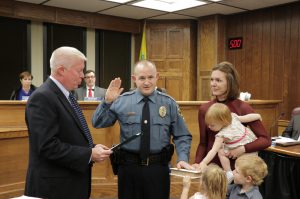 Sergeant Austin Kenny has been a member of the BTPD since August 2005. He is a 2003 graduate of Brick Memorial High School. Prior to joining the BTPD, he worked as a Special Police Officer in Point Pleasant Beach from 2003-2005. Sergeant Kenny has served as a Field Training Officer, on the BTPD Marine Unit and Honor Guard. Sgt. Kenny attended the first BTPD Police Camp in 1997 and served as a member of the Brick Police Explorers from 1999 – 2003.

The promotions were necessitated by the retirement of BTPD Captain Timothy Boyle who retired December 1 after twenty-four years of service and were done in accordance with civil service requirements.